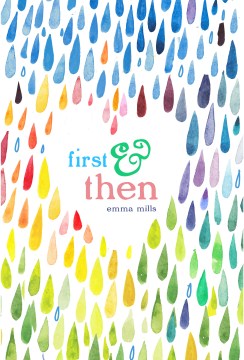 First & Then
by Emma Mills

Recommended in John Green's Book Giving Guide for the Holidays 2015 Devon Tennyson wouldn't change a thing. She's happy silently crushing on best friend Cas, and blissfully ignoring the future after high school. But the universe has other plans. It delivers Devon's cousin Foster, an unrepentant social outlier with a surprising talent, and the obnoxiously superior and maddeningly attractive jock, Ezra, right where she doesn't want them--first into her P.E. class and then into every other aspect of her life. With wit, heart, and humor to spare, First & Then is a contemporary novel about falling in love--with the unexpected boy, with a new brother, and with yourself.

Morgan didn't mean to do anything wrong that day. Actually, she meant to do something right . But her kind act inadvertently played a role in a deadly tragedy. In order to move on, Morgan must learn to forgive first, someone who did something that might be unforgivable, and then, herself. But Morgan can't move on. She can't even move beyond the front door of the apartment she shares with her mother and little brother. Morgan feels like she's underwater, unable to surface. Unable to see her friends. Unable to go to school. When it seems Morgan can't hold her breath any longer, a new boy moves in next door. Evan reminds her of the salty ocean air and the rush she used to get from swimming. He might be just what she needs to help her reconnect with the world outside. Underwater is a powerful, hopeful debut novel about redemption, recovery, and finding the strength it takes to face your past and move on. 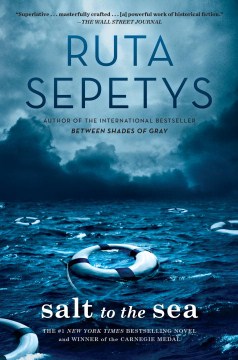 Salt to the Sea
by Ruta Sepetys

World War II is drawing to a close in East Prussia and thousands of refugees are on a desperate trek toward freedom, many with something to hide. Among them are Joana, Emilia, and Florian, whose paths converge en route to the ship that promises salvation, the Wilhelm Gustloff. Forced by circumstance to unite, the three find their strength, courage, and trust in each other tested with each step closer to safety. Just when it seems freedom is within their grasp, tragedy strikes. Not country, nor culture, nor status matter as all ten thousand people aboard must fight for the same thing: survival. Told in alternating points of view and perfect for fans of Anthony Doerr's Pulitzer Prize-winning All the Light We Cannot See , Erik Larson's Dead Wake , and Elizabeth Wein's Printz Honor Book Code Name Verity , this masterful work of historical fiction is inspired by the real-life tragedy that was the sinking of the Wilhelm Gustloff -- the greatest maritime disaster in history. As she did in Between Shades of Gray , Ruta Sepetys unearths a shockingly little-known casualty of a gruesome war, and proves that humanity can prevail, even in the darkest of hours. 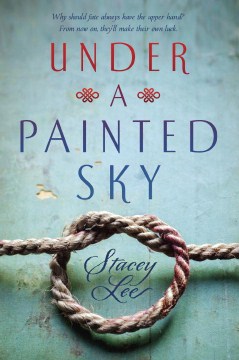 Under a Painted Sky
by Stacey Lee

A powerful story of love, friendship, and sacrifice, for fans of Code Name Verity. All Samantha wanted was to move back to New York and pursue her music, which was difficult enough being a Chinese girl in Missouri, 1849. Then her fate takes a turn for the worse after a tragic accident leaves her with nothing and she breaks the law in self-defense. With help from Annamae, a runaway slave she met at the scene of her crime, the two flee town for the unknown frontier. But life on the Oregon Trail is unsafe for two girls. Disguised as Sammy and Andy, two boys heading for the California gold rush, each search for a link to their past and struggle to avoid any unwanted attention. Until they merge paths with a band of cowboys turned allies, and Samantha can't stop herself from falling for one. But the law is closing in on them and new setbacks come each day, and the girls will quickly learn there are not many places one can hide on the open trail.

In one devastating night, violin prodigy Etta Spencer loses everything she knows and loves. Thrust into an unfamiliar world by a stranger with a dangerous agenda, Etta is certain of only one thing: she has traveled not just miles, but years from home. And she's inherited a legacy she knows nothing about from a family whose existence she's never heard of. Until now. Nicholas Carter is content with his life at sea, free from the Ironwoods-a powerful family in the Colonies-and the servitude he's known at their hands. But with the arrival of an unusual passenger on his ship comes the insistent pull of the past that he can't escape and the family that won't let him go so easily. Now the Ironwoods are searching for a stolen object of untold value, one they believe only Etta, his passenger, can find. In order to protect her, Nick must ensure she brings it back to them-whether she wants to or not. Together, Etta and Nicholas embark on a perilous journey across centuries and continents, piecing together clues left behind by the traveler who will do anything to keep the object out of the Ironwoods' grasp. But as they get closer to the truth of their search, and the deadly game the Ironwoods are playing, treacherous forces threaten to separate Etta not only from Nicholas but from her path home forever.

Posted by Raritan Public Library at 7:17 PM No comments: