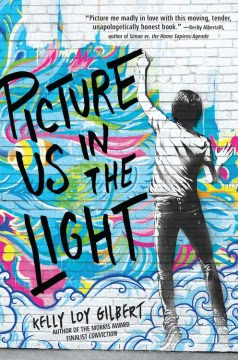 Picture us in the Light
by Kelly Loy Gilbert

Danny Cheng has always known his parents have secrets. But when he discovers a taped-up box in his father's closet filled with old letters and a file on a powerful Silicon Valley family, he realizes there's much more to his family's past than he ever imagined. Danny has been an artist for as long as he can remember and it seems his path is set, with a scholarship to RISD and his family's blessing to pursue the career he's always dreamed of. Still, contemplating a future without his best friend, Harry Wong, by his side makes Danny feel a panic he can barely put into words. Harry and Danny's lives are deeply intertwined and as they approach the one-year anniversary of a tragedy that shook their friend group to its core, Danny can't stop asking himself if Harry is truly in love with his girlfriend, Regina Chan. When Danny digs deeper into his parents' past, he uncovers a secret that disturbs the foundations of his family history and the carefully constructed façade his parents have maintained begins to crumble. With everything he loves in danger of being stripped away, Danny must face the ghosts of the past in order to build a future that belongs to him. 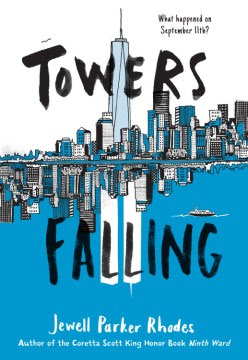 When her fifth-grade teacher hints that a series of lessons about home and community will culminate with one big answer about two tall towers once visible outside their classroom window, Deja can't help but feel confused. She sets off on a journey of discovery, with new friends Ben and Sabeen by her side. But just as she gets closer to answering big questions about who she is, what America means, and how communities can grow (and heal), she uncovers new questions, too. Like, why does Pop get so angry when she brings up anything about the towers' Award-winning author Jewell Parker Rhodes tells a powerful story about young people who weren't alive to witness this defining moment in history, but begin to realize how much it colors their every day. 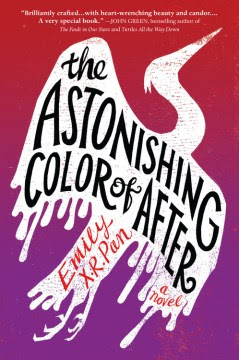 The Astonishing Color of After
by Emily X.R. Pan

Leigh Chen Sanders is absolutely certain about one thing: When her mother died by suicide, she turned into a bird. Leigh, who is half Asian and half white, travels to Taiwan to meet her maternal grandparents for the first time. There, she is determined to find her mother, the bird. In her search, she winds up chasing after ghosts, uncovering family secrets, and forging a new relationship with her grandparents. And as she grieves, she must try to reconcile the fact that on the same day she kissed her best friend and longtime secret crush, Axel, her mother was taking her own life. Alternating between real and magic, past and present, friendship and romance, hope and despair, The Astonishing Color of After is a stunning and heartbreaking novel about finding oneself through family history, art, grief, and love. Give Me Some Truth
by Eric Gansworth

In 1980 life is hard on the Tuscarora Reservation in upstate New York, and most of the teenagers feel like they are going nowhere: Carson Mastick dreams of forming a rock band, and Maggi Bokoni longs to create her own conceptual artwork instead of the traditional beadwork that her family sells to tourists--but tensions are rising between the reservation and the surrounding communities, and somehow in the confusion of politics and growing up Carson and Maggi have to make a place for themselves. 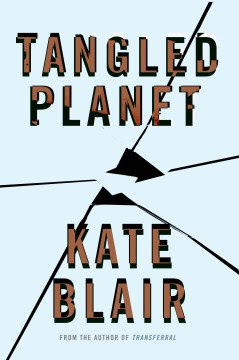 It's taken four hundred years of travel, but the starship Venture has finally arrived at its destination, Beta Earth, an uninhabited, untouched planet. The first night seventeen-year-old engineer Ursa is on Beta Earth, she encounters a dead body. She's positive she saw a large creature with sharp teeth, something that shouldn't even be on the planet, but nobody believes her. As injuries and bodies start piling up, Ursa must figure out who to trust when her fellow crewmates start taking sides between maintaining Venture's safety and the hope of creating a home on Beta Earth. 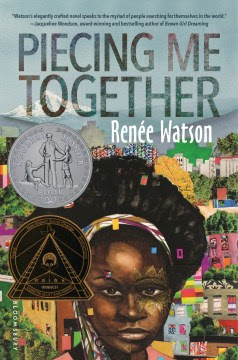 Piecing Me Together
by Renée Watson

Jade believes she must get out of her poor neighborhood if she's ever going to succeed. Her mother tells her to take advantage of every opportunity that comes her way. And Jade has: every day she rides the bus away from her friends and to the private school where she feels like an outsider, but where she has plenty of opportunities. But some opportunities she doesn't really welcome, like an invitation to join Women to Women, a mentorship program for "at-risk" girls. Just because her mentor is black and graduated from the same high school doesn't mean she understands where Jade is coming from. She's tired of being singled out as someone who needs help, someone people want to fix. Jade wants to speak, to create, to express her joys and sorrows, her pain and her hope. Maybe there are some things she could show other women about understanding the world and finding ways to be real, to make a difference. 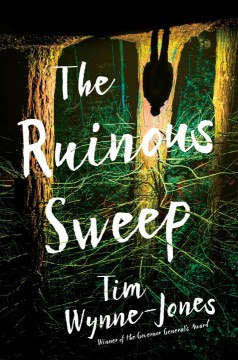 The Ruinous Sweep
by Tim Wynne-Jones

On the night Donovan Turner is thrown out of a car on a highway in the middle of nowhere, he can barely remember his own name, let alone the past twenty-four hours. Where is he? Where is his girlfriend, Bee? In an attempt to flag down the next passing car, he startles the driver, causing a fatal accident. With sirens in the distance and the lingering feeling that he's running from something--or someone--Donovan grabs the dead driver's briefcase and flees. Meanwhile, Bee is fighting for Dono's life every bit as much as he is. But when the police show up and hint that he is the prime suspect in a murder, Bee is determined to put together the pieces of what happened and clear his name.
Posted by Raritan Public Library at 5:31 PM 1 comment: